Not in the mood to be a sysadmin

I'll write more later, but this gist is things moved very fast today and I was admitted to the hospital this evening to begin treatment tomorrow.

What I can't get over and wanted to rant about (and probably few of you care about it, but it's my blog and I want to rant) is the annoying redirection system they have here where you have to agree to some policy before general Internet access starts working.  Aren't things just supposed to work on a Mac?  Oh yeah, except when they don't.

I finally have things working on my laptop right now, but it required using both ConnectBot on an Android phone and looking at the network settings on an iPhone and some network fiddling on the Mac to get there.  (How do non-tech people deal with this?)  I was actually pretty damn floored when the doctor came in and asked if there were any other questions that I had, and when I responded that I needed to know the IP address of the DNS server that he left the room and came back with an iPhone on the network settings screen that answered my question.  (And why doesn't the Android network settings tell you that?  I should write a quick app for that...)

Anyway, I'll get back to more cancer news later tonite if I can.  Right now I'm kinda starved and hoping that Lorien arrives soon with some food.
Posted by dingdingwikki at 8:50 PM 5 comments

Since I have a bit of a tendency to be verbose, here's the tl;dr version:

I guess that's starting to get a little bit easier to say.

The slightly longer version is that this is the only spam I will send about this, and if you want to keep up to date in the future, go to http://richandlorien.blogspot.com/

Now on to more details, for those of you who care to read further.

Specifically, I have mediastinal B-cell lymphoma.  For any of you lacking basic Wikipedia skills, the mediastinum is an area of the chest.

There are two bits of good news to report.  One is that the cancer has not spread to any other parts of my body.  The other is that it is likely curable.

As much as I'm not particularly happy about a diagnosis of cancer, I realize that it could be much worse.  And it's good to finally know what's wrong with me.  I've been sick to some extent for 8 months now, unsure of why.  I had been diagnosed with GERD, which obviously in retrospect was wrong.  What's really going on is that I have a large tumor in my chest that's pushing on my internal organs and therefore leading to a lot of the same symptoms as reflux (including trouble eating, chest pain, and coughing).

I saw an oncologist today in Oakland who wants to begin treatment as soon as possible.  Specifically, he thinks I should have chemotherapy, followed by radiation.  Future chemotherapy would be on an outpatient basis, but he wants to initially hospitalize me for about 5-6 days.  I was able to get another appointment with an oncologist at the California Pacific Medical Center (CPMC) in San Francisco for tomorrow to get a second opinion before starting any treatment.

You might wonder why I'm blogging about this, advertising it in such a public forum.  One is just a matter of practicality.  I'd like to keep whomever wants to know what's going on in the loop.  But I won't necessarily have the time and energy for too many individual email or phone conversations.  And while I'm initially also sending out this one post to a fairly large audience -- including family, close friends, work colleagues, people I knew well in the past but haven't kept contact with as much as I'd like, people that my relationship with is a bit more casual and/or infrequent -- this will be the last such spam.  So if you want to know what's up beyond this, follow our blog at http://richandlorien.blogspot.com/

And I've already broken some of my basic principles of privacy (like not sending medical information over insecure email -- why after all of these years can't we have a commonly used means of secure communication?), and Google already knows so much about this, that there's really not much lost by being completely public about this, even to any total strangers who might come across this blog.

And maybe it's not such a bad idea for people to share the bad things in life, so that when something bad does happen to them, they know they're not alone.

And hopefully it will be a bit therapeutic to write about some of this.  As well as a way to kill the time.

And I should confess that I might not have thought of it as an option had it not been for my friend jg, who was diagnosed with leukemia back in the fall of 2010, and has been blogging about it at http://www.jgwkia.com/ .  I have appreciated reading his blog in the interim, and I really appreciated now being able to go back and look at some of his older posts.  And although I may not have a catchy slogan (jgwkia stands for "jg will kick its ass"), his positive thinking throughout his ordeal has made an impression on me.  He's also one of the first people I turned to last week when I felt that I needed to talk to someone about this.  It reminded me a bit of when Brendan called me first after his house fire, since I had also had a house fire.

So I'll do my best to keep things updated on the blog, but don't expect any particular frequency of posts.  Even in the best of times I sometimes have a problem with follow through, and I'm sure some of the times coming up will be a significantly harder times.

A lot of people have already asked how they might be of help.  I don't have a lot of specific requests right now, but the main avenue of help (for those that are local) will be helping Lorien to take care of both me and of Dylan, who is now 16 months old.

That's it for now.  Yup, I was right, that ended up being way longer than I had thought.  Thanks if you actually managed to make it until the end.

In other Dylan news, he's now walking like a champ (he started at the end of December), and is working on tooth #16, a particularly recalcitrant molar.  He's also learning new words all the time, although it's often difficult to understand what he's trying to say.

Here's a pic from a couple of weeks ago on a hike up in Tilden Regional Park, where he did some of his own hiking for the first time. 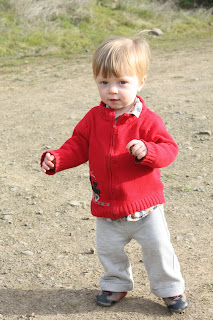