So I've got this pair of fake leopard fur, fuzzy dice that hang from the handlebars on my commuting bike, wrapped over my ding ding bell. Like the ones people used to hang from the rear view mirror or their car -- does anyone still do that?

They're kind of pointless, and kind of silly, but I've grown quite fond of them. I've had them on my bike for a number of years now -- I think I got them sometime around 2002 or 2003 from a housemate that got them along with a bunch of stuff that a friend of his/her's (it's complicated) was discarding when cleaning our her closet (along with other fake animal print items, if I recall correctly). I've gotten a disproportionate number of complements over the years for such an inconsequential bicycle adornment. Lots of people have admired them, and one even offered (practically begged) to purchase them (I declined).

Which brings me to this evening. I'm leaving work, walking to my bike in the parking garage of my office. As I'm getting on my bike, I notice there's one die on my bike. Yup, just one. The two dice should be connected by a short piece of yarn, but its mate is nowhere in sight.

I'm not sure why this is troubling me so. It's just a stupid pair of dice. But somehow I've gotten sentimentally attached to them. Perhaps this is just a sign that it's time to move on, and put something else that's fun worthy on my bike. (Riding along with a single fuzzy die doesn't appeal to me much.) Or that I shouldn't get so attached to things.

Hopefully Lorien is right in her assessment that the yarn just wore through. I can't imagine that someone would have actually cut it, unless perhaps the building management is passive aggressively trying to get back at me for the various verbal altercations I've had with them over the years. And there are far more valuable things that I leave on my bike worth stealing than a synthetic, cube shaped, game oriented, faux animal covered, piece of fluff.

And maybe I'll just happen to spot them on the street tomorrow morning if I take the exact same route. Okay, maybe not.
Posted by dingdingwikki at 8:43 PM 1 comments 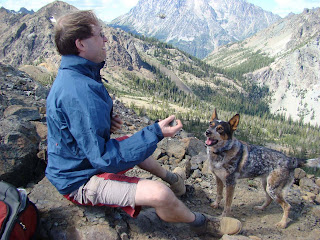 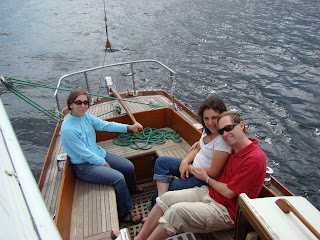 We've been bad about posting, mostly because it's been a very busy summer. We'll try to catch up, starting with our trip at the end of July to visit Chip and Karen in Seattle. We spent a weekend up there, which was great - I hadn't been to Seattle in 8 years and had forgotten how much I like it there. These are both pictures from Chip's camera - we may post some of our own once we get them off the camera.

On the Saturday, we drove to the eastern Cascades and climbed Iron Peak, a tough but worthwhile hike. Here's Rich juggling rocks at the peak with Chip and Karen's dog Sydney looking on.

On Sunday, Chip took us sailing. There was decent wind and we got to see the area from the water. The second picture is Karen, Rich and I on the boat.

By the way, I'd like to make a shout out to the Silkies, who just welcomed baby Salem into the world. Congratulations!
Posted by Lorien at 8:22 PM 1 comments