Dylan's head continues to grow to large proportions.  He had his 3 month doctor appointment today, and at 12 lbs. 11 oz. is at 22% for weight.  His height is similar, at 26%, but his head size is now up to a whopping 82%.  So basically, all of his weight gain is going to his head.
Posted by dingdingwikki at 1:33 PM 1 comments

Breastfeeding is supposed to be "natural", but it certainly wasn't so easy for me.  Dylan lost 14 oz after he was born, so we were supplementing his diet with formula for the first two months, while I struggled to get my supply up.  Taking fenugreek supplements seemed to do the trick for me, and between that, lots of support from Rich and perseverance, Dylan hasn't had a drop of formula since Dec 23.

Here's your dose of Dylan, who has learned to grab at toys (and everything else) within the last week.

This makes me very happy.

Dylan at the beach

On Sunday, we took the Tennessee Valley trail in Marin out to the beach. Dylan napped in the Ergo on the trail, but was awake and alert and enjoyed the beach.

Dylan is big enough now to ride on Daddy's shoulders.

Before taking the trail back to the car, we climbed to the lookout and got a view from above.

For all the pictures, click here.
Posted by Lorien at 8:52 PM 0 comments

We were feeling cooped up, so we took Dylan on his first hike on Sunday.  We got a late start, but had time to do the Stream Trail loop in Oakland's Redwood Regional Park. He enjoyed looking around at the trees for the first fifteen minutes or so, then conked out, but reawoke for snack time, shown here:

Rich also got to try out the Ergo carrier for Dylan, now that he can hold up his head.

We're looking forward to more adventures with Dylan, and welcome any insight on how to change his diaper outside when it's cold.
Posted by Lorien at 10:50 PM 4 comments

We were told that flying with an infant is pretty easy, and it turned out to be the case. Dylan nursed or slept during each of the three legs of the trip.  For what it's worth, the whole family avoided being either groped or scanned in the X-ray backscatter machines in San Francisco, Toronto and Philadelphia. TSA employees were courteous (although a little less so in Philly) and tried to make it easier for us to get through security with all our baby paraphernalia, since now we're those people you don't want to be behind in line.

Here's Dylan smiling at the gate in PHL: 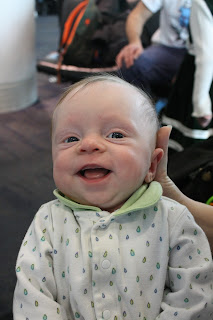 After Toronto, we flew to Philadelphia to visit Rich's family. The big news on that end is that Larry and Galit got married! Here's a pic from their ceremony at the Media courthouse.  They'll have a Jewish wedding in May in Israel. Click here for more wedding pictures. 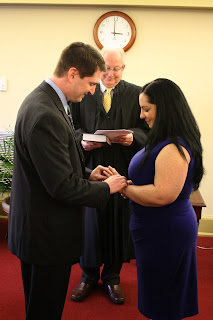 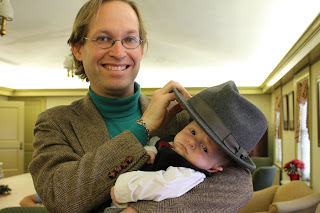 Taken at the celebration dinner, here's Dylan with cousin Matthew, who seems to have quite the way with babies (or at least our baby): 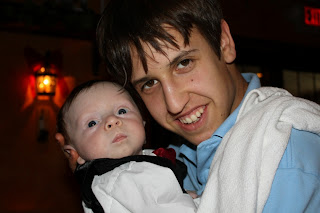 Here are pictures of Dylan with Grandmom and Grandpop Fromm. 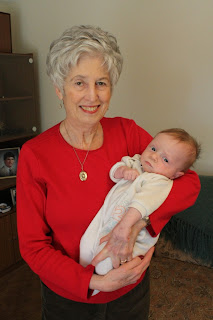 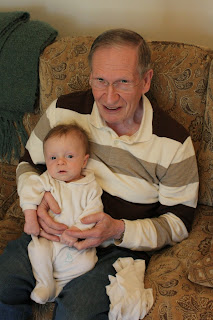 We took Dylan to visit Rich's nursery school, although the kids there are quite a bit older. 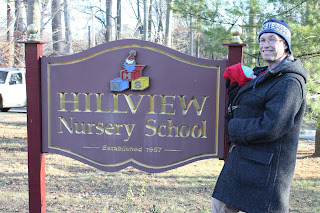 We also took Dylan to the Macy's light show downtown, and then went to the Reading Terminal and the Christmas Village by City Hall.  Here's a pic in front of Philadelphia City Hall: 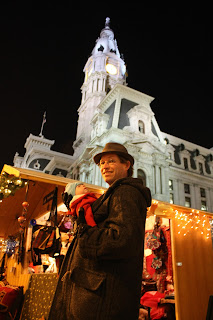 Thanks to all Fonos and Fromms for a great visit.  If there are any other pictures you have that you'd like posted, send them along.
Posted by Lorien at 2:06 PM 1 comments 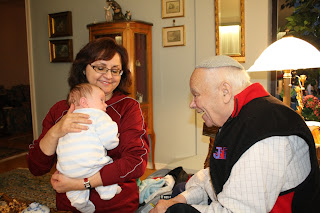 Bob and Sherri brought their crew to visit as well.  Here's Dylan with the Sorger kids Jarett, Elly and Sendi (forgive any misspellings): 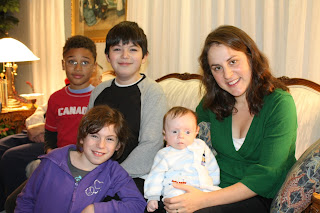 The trip also afforded us the opportunity to take Dylan into the snow for the first time. Now he's all ready for Tahoe! 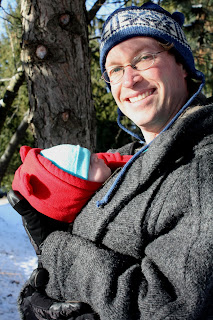 We also went with Judy and George on a trip downtown to The Coffee Mill so that Rich could have chestnut puree for the first time. We walked down to the Eatons Center and saw this year's Swarovski Christmas Tree.  Dylan was entranced by being in a mall for the first time.  Should we be worried? 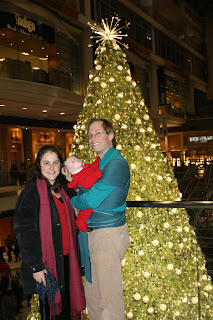 Photo credit to Judy for this picture. And of course, for more pictures, go to Rich's flickr photostream.
Posted by Lorien at 11:31 PM 1 comments

I've been doing a decent job of taking digital pictures over the past few years, but I've been doing a somewhat less stellar job of organizing them and making them available to others.  I wrote a bunch of homebrew scripts that I had been using for making web based albums, and a fairly small subset of my photos have been up at http://richandlorien.org/pictures/ courtesy of these.

I have been meaning for quite some time to do some work improving those scripts, but I never can seem to find the time.  And with Dylan's arrival, I am finally forced to admit that it will probably never become a high enough priority.

Enough people I know seem satisfied with flickr as a photo sharing tool that I've decided to give it a try.  My flickr account is dingdingwikki.  My sets and photostream are respectively available at:
If you already have a flickr account, feel free to send me your info and/or add me as a contact.

If you do not have a flickr account, one is not required to see (most of) my pictures, but you might want to consider getting one anyway.  Having a flickr account will allow you to comment, tag, etc.  And while the vast majority of my pictures are publicly available, this is already not 100% true.  Also, I may in the future only make the high resolution originals available to my contacts.  Note that a basic flickr account is free.  (You only have to pay if you want a pro account, which I did, since I quickly hit the 300 MB monthly upload max on the free account.  I decided that unlimited uploads and unlimited storage and usefulness for distributing high resolution originals was worth $25/year.)

There will continue to be blog posts (with selected pictures) here, and I will continue to post quick stuff and snapshots on facebook, but for the time being I will be using flickr for more serious photo management.

So far I started at Dylan's birth and have caught up to the present.  It will take a bit of time to go through several years worth of digital photographs and get them edited and captioned and uploaded as well.  Eventually, but not in the near future.  Maybe someday I'll scan in film negatives, but I don't actually have that many of them from my adult life. 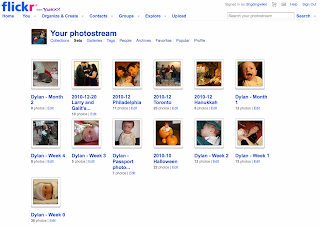 Posted by dingdingwikki at 12:26 AM 0 comments