I guess I've been chattier lately on a finer granularity, on Facebook. It's a bit easier to say something brief.

So there's loads to catch up on (and lots of pictures that I need to go through, which seems to be a recurring theme), but I won't get too into that now, except to say that we enjoyed our 2 week trip back east for my nephew Matt's Bar Mitzvah and then traveling around seeing friends and seeing the fall colors. I will get pictures up eventually...

But the topic du jour is food. After coming back from Europe we had gotten pretty excited about French food and had a desire to expand our cooking horizons a bit. But we hadn't managed to get around to it much. Seeing "Julie and Julia" kind of reminded us again and prodded us to consider it more. Reading "My Life in France" (one of the books that the movie is based on), which my sister-in-law Laura got for us, also helped.

So a little while back we checked "Mastering the Art of French Cooking" out of the library, to give it a test drive. We were pretty impressed with some of our initial efforts (Ratatouille, Garlic Soup) that we decided to go ahead and buy it.

So this past weekend we dived head first into a major cooking extravaganza, Beef Bourguignon. It's quite an undertaking. Start to finish it was about 5 hours of prep time. But it's not really that bad -- a good chunk of that it's just sitting in the oven cooking. A big enough chunk that we easily were able to sit down and watch a movie ("Whatever Works", Woody Allen's latest). And apparently the dish only gets better if you let it sit around a bit, so we made the main course ahead of time on Saturday, and didn't have that much work to do on Sunday, when we were serving.

But we didn't just stop there, and before we knew it, we were planning a 5 course meal. At times some of the minutia of our planning conversations were perhaps a little embarrassing -- trying to figure out what wine to use for the Beef Bourguignon (it takes a full bottle), or what kind of mushrooms to use (how can Julia possibly just say "mushrooms" -- I guess she couldn't anticipate the dozens of varieties that we have to choose from in Berkeley), or obsessing over what kind of bread to buy for the appetizer, and was it appropriate to use the same kind of bread for the croutons for the salad (we ended up with just one kind).

Regarding the wine, I've always been of the opinion that while it's silly to use too nice of a bottle of wine for cooking, you should also have some minimum standards, and not use anything you wouldn't want to drink. We couldn't find any inexpensive Burgundy reds at BevMo, but I found one bottle of Burgundy for $7 at Trader Joe's, and decided that that would surely be drinkable enough. We poured most of the bottle into the dish before it went in the oven, but I saved a little taste for us to sit down and enjoy with the movie. It smelled decent, and had the right color, but when we actually tasted it, I was pretty horrified -- it was not a very good wine, to say the least. Way too acidic and lacking in flavor. Definitely something I wouldn't want to drink a bottle of. Well, it was too late to do anything about it, and as it turned out, the dish was still amazing. So maybe it's a good thing we tasted it after adding it, because if we had done it the other way around, we probably would have just dumped the whole bottle. Nevertheless, next time I think we may try something else, to see if a better wine makes it even better. 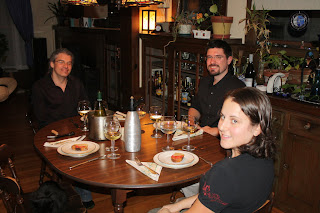 There's one scene in the movie where Julie has this revelation while cooking mushrooms that she's been doing it all wrong. It was kind of neat making this soon after seeing the movie, because I can now somewhat relate to that. Although the main point of Julia's that Julie was realizing (don't crowd the mushrooms) I don't think as much applied to what I've done in the past -- but I definitely did notice a difference from Julia's other point, of using a much higher heat. 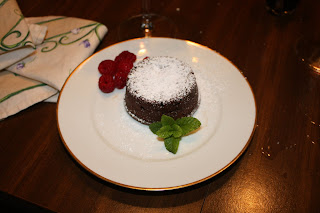 Anyway, it was a pretty epic meal, and although it was a lot of work, I'd say it was totally worth it, and we'd do it again. And it gave us an excuse to serve an entire meal on the china that I've inherited. Thanks to Julia (and Julie) for inspiration, to Todd and Ryan for being willing culinary guinea pigs, and to the librarian at the Berkeley public library for helping us pick out some French cafe music to set the right atmosphere. And to Dirk for graciously helping to lick out the sauce pan. 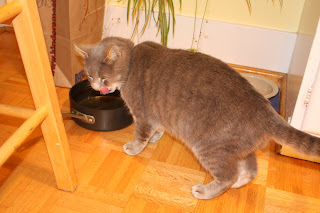 I had thought about adding one final finishing touch by printing out the menu on little cards, but we need more toner and I decided it just wasn't worth it. So here it is electronically, complete with the requisite amount of fancy restaurant-style modifiers: