We spent 4 full days in Provence, and it will take several posts to blog it, since we had a wonderful time, and Provence is beautiful. We were based at the Hotel de Soleil in St. Remy-de-Provence, where Van Gogh was institutionalized, and we explored around the region by car. Provence was the center of Roman civilization in ancient Gaul, and the area is littered with ancient ruins.

On the first day, we went to Avignon and the Pont de Gard. During the 14th century, the Popes made their home here, feeling that Rome was too corrupt. Avignon's skyline is dominated by the Palais des Papes. And of course, there's the immortal pont d'Avignon from the nursury rhyme.
Pictures:
1. The Pont d'Avignon with Mont Ventoux in the distance. As you can see, it no longer crosses the Rhone.
2. The song. Rich learned it for this trip and wouldn't stop singing for days. And yes, we danced on the bridge.
3. Me on one of the windy mideaval streets behind the Palais de Papes
4. The Palais des Papes
5. The Pont de Gard (the remains of a Roman Aquaduct) near sunset. 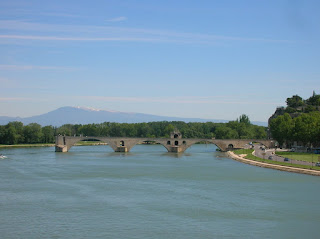 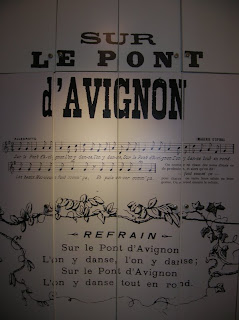 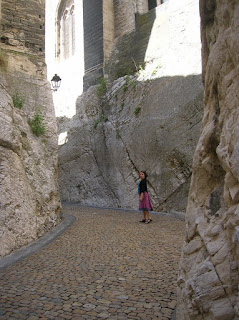 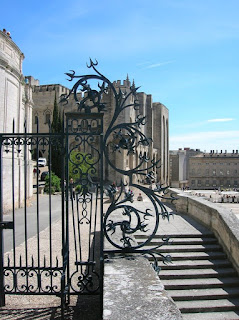 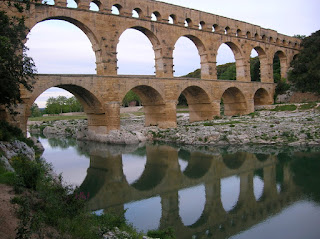 Rich and Lorien cross the Alps 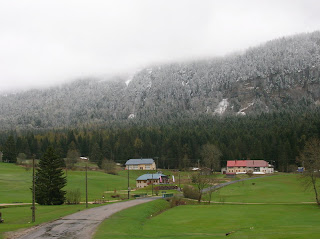 Rich may have more to say about our drive through a surprise snowstorm (it was April 29, so it was only a little surprise) but here's a picture from the drive that I really like, taken near Mijoux. This is the most dramatic snowline I've ever seen.
Posted by Lorien at 8:43 PM 0 comments

Cheese and Yellow Wine in the Jura

We spent 2 full days in the Jura, about an hour drive north of Geneva (in decent weather conditions...I think Rich discussed our ill-fated trip through the Alps in an earlier post). The first day we hiked in the vineyards around Arbois, center of production of the tasty and slightly bizarre yellow wine. That was the day of the cheese debacle. The next day we hiked around the Herrisson waterfalls, then I went for a walk around the village we were staying in, Montigny-Sur-L'Ain, while Rich slept off the cheese. Pictures below:

1. Rich sitting in the middle of a traffic circle in Arbois
2. Arbois seen from the vineyards above the town
3. Rich by the waterfalls
4. The cows near our village. They all creepily stopped what they were doing to watch me walk by.
5. Christelle and Pascale, the proprietress and proprietor of Au Douillet Gourmet, the B&B where we stayed. 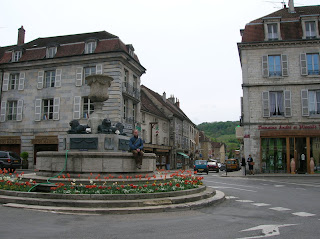 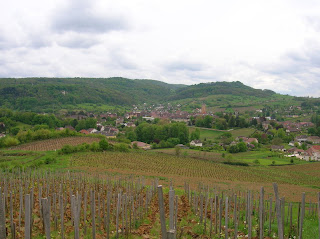 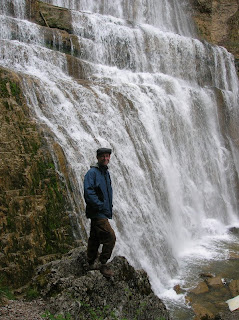 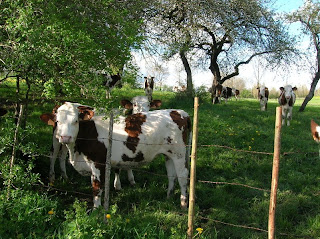 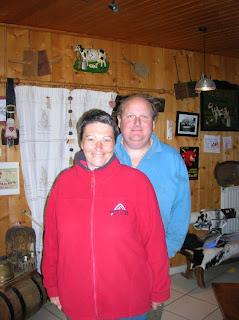 A wine-soaked tour of Burgundy April 22-26

We left Paris Wednesday morning and took the train to Beaune, stopping off in Dijon for lunch. With the help of a hand-drawn map in "Long Ago in France", we located what we think was MFK Fisher's house for part of her time living in Dijon.

We got to Beaune in the late afternoon, and spent the next three full days bike touring in the area. We did a figure-8 route in the red wine area between Beaune and Dijon, including the "Route des Grands Crus". Because the land that is planted with vineyards in this area is actually fairly narrow (about 1 km wide), part of our ride was through canola and wheat fields. The tour company was called "Detours in France" and we were quite happy with them. The person there that arranged everything for us was actually a Canadian expat who had married a local.

Our trip included a private tour of the Hotel-Dieu, which was quite amazing. The Hotel-Dieu is a public hospital that was built in the 1400s by Nicholas Rolin and his wife Gigonde de Salon. Rolin felt that he needed to do something big to atone for his many sins. The hospital was in use until the 1970s, and its operation (as well as that of the modern hospital) was and continues to be funded by the wine grown on the prime terroir that Rolin endowed to the hospital.

Rich has already blogged extensively about our experiences with the heavy food and delicious reds and whites, so I'll just post some of the pictures here:

(1)me in front of MFK Fisher's house in Dijon
(2)Rich in a field of canola on Day 1 of our ride
(3) me at a low-key degustasion in Nuits St. Georges on the morning of Day 2
(4) a vineyard with a wine village behind on Day 3. This picture give a sense of how the vines were just budding when were were there.
(5) the courtyard of the Hotel-Dieu. The glazed tile roof is common on important buildings throughout Burgundy. This was the only really rainy day of our trip. 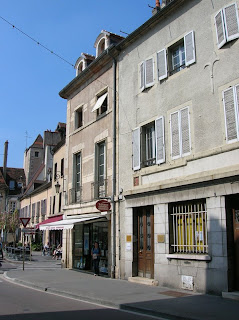 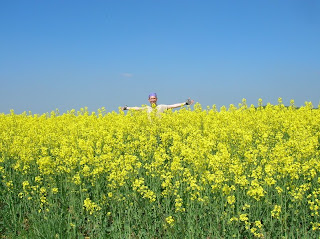 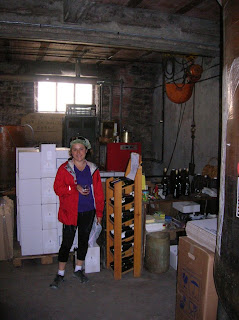 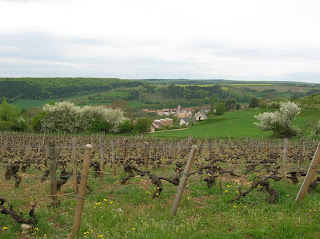 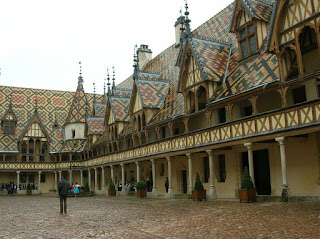 We promised to update the blog with pictures once we got a chance. We'll be posting the full set of pictures on our website once we're done editing them.

At the start of our trip we spent 3 days in Paris. We mostly spent the time running around to museums and biking around town using Velib, the "free" bike system. There's a good article about in in the New York Times here. Favorite museums were the Musee de Moyenne Age, which has a fantastic collection of illuminated manuscripts and unicorn tapestries, and of course the Musee d'Orsay for an impressionism overload. Also, I think that Rich has already blogged about the enormous set of eight Monet waterlillies paintings at the Orangerie.

We had a nice dinner at Au Trou Gascon our last night in Paris. It featured cuisine from the Southwest of France. This is where we began our tragic love affair with Armagnac. I also ate Foi Gras for the first time. It was alright, but certainly not good enough to justify the animal welfare issues - for me anyway.

Here's some pictures: (1) me riding a Velib bike near the Bastille in a protected bike lane; (2) a gargoyle contemplating Paris, including the Pompedieu center; (3) Notre Dame Cathedral - this gives a good sense of a sunny day in Paris in the spring; (4) the spiral stairs leading up to the top of the Arc de Triomphe. 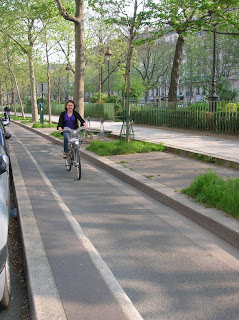 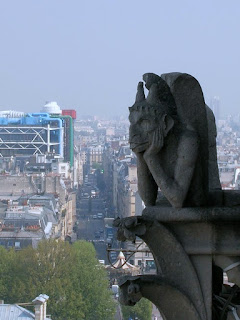 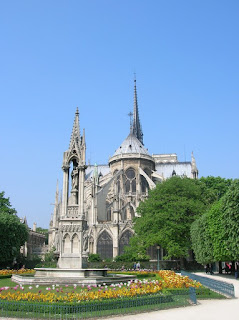 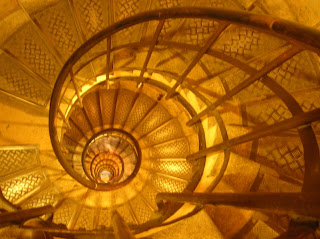