Yeah, it's pretty incredible. Crowds of people spontaneously gathering in the street, and it's political, but it's not a protest. It's a party. It's even enough for me to overcome my cynicism for a day and be excited, be hopeful, be proud to be an American.
Posted by dingdingwikki at 12:25 AM 2 comments

Tonight I have seen people of all ages and colors dancing in the streets of Oakland and Berkeley. I have seen cynical Oakland hipsters in a bar crying because of the words of a politician on TV. I've seen a gathering of about a thousand Berkeley students singing the Star Spangled Banner and chanting USA! USA! on Telegraph Avenue.

What did you all see today?

[posted by Lorien]
Posted by dingdingwikki at 12:14 AM 1 comments

Are we there yet?

I'll be the first to admit that I don't actually particularly like Obama that much. He's very charismatic, and a good speaker, but he's still a product of the two party duopoly, and I don't really expect things to fundamentally change if he is elected president. He's not really a progressive, and I don't expect him to swiftly end the US occupation in Iraq, stop US imperialism, turn back the assault on the US constitution and civil liberties, provide for universal health care with a single payer system, reign in the military industrial complex, eliminate the concept of corporate personhood, end the "War on [some] Drugs", reinstitute a reasonable definition of what is patentable, roll back copyright to a reasonable length, close Guantanamo, end the Cuban embargo, etc. etc. etc., these are just a few of the things that come to my mind off the top of my head in what is probably the first political ranting I've done in this space (which Lorien will probably be annoyed at me for). And frankly, I think this country is way too conservative for any true progressive to ever be elected president, and I do realize that there is a limit to how much one person can possibly do in that office with even the best of intentions. (Although I'm shocked by how successful George Bush has been in using the power of that office to do so much harm.) 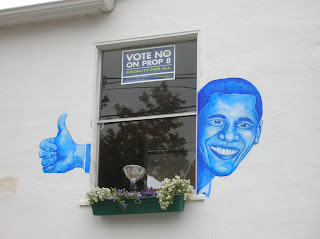 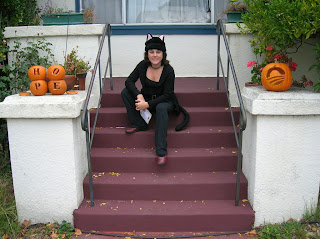 And the sense of hopefulness around here is encouraging, even if I feel it is somewhat misguided. (I was going to say delusional, but that's a bit too harsh.) I can't imagine anyone having been motivated enough to paint a picture of John Kerry on the side of their house (the picture here is from our neighborhood). And I even was able to overcome my cynicism enough to suggest that we do a set of Obama-themed pumpkins for Halloween. I then discovered that we weren't the only ones. (I'll let you know if one of our pictures gets posted there.) 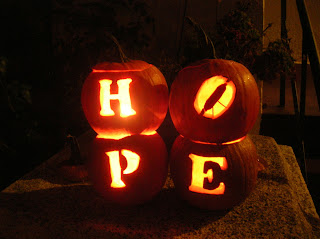 So hopefully things will be just a bit brighter on the morning of November 5. We really could use at least a bit of a counter balance to the past 8 years. And if not, well, maybe we'll have to really start seriously thinking about heading a bit further north. 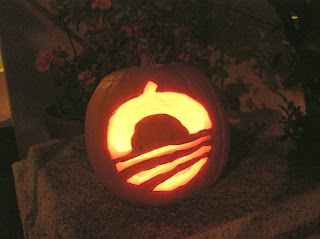 And I really hope that California Prop 8 fails. It would be really sad to have friends of ours have their marriage taken away from them because of other peoples' prejudices.
Posted by dingdingwikki at 5:18 PM 2 comments