A tale of 3 doctors' appointments

First, the most important appointment: Rich had a scan on Monday and it was all clear. His oncologist feels that he's stable enough, and his odds of recurrence are sufficiently low, that he doesn't need another scan for a year. Huzzah!

Next, Dylan had his 3-yr old well child visit. He hasn't been particularly "well" this week, since he's been suffering from a persistent cough, but, they did weigh and measure him. He's 38 3/4", which puts him in the 76th percentile for height, and 32 pounds, which is the 51st percentile for weight. It also means that he's legitimately tall enough for the big merry-go-round at Fairyland in Oakland. Sadly, they no longer measure head circumference, which is where Dylan really excelled (at one point I think he was up to the 98th percentile).

Finally, I caught Dylan's cold, and pink eye. Dylan's was mild and cleared up without medication, but mine was pretty yucky. I didn't even know adults got pink eye. My doctor's appointment was to get antibiotic drops for that.

Anyway, it's been a while. Dylan had a 3rd birthday party at Aquatic Park near Dreamland Playground (or Train Park, as we like to call it). Pics are here.

And here's Dylan in his Nemo Halloween costume that he finally got to wear after using it as a stuffed animal for a year. If you recall, he missed Halloween last year because Hurricane Sandy interfered with his flight home from Philly. 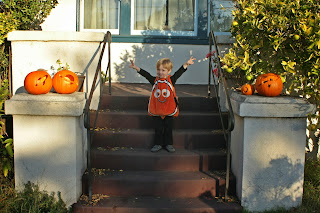 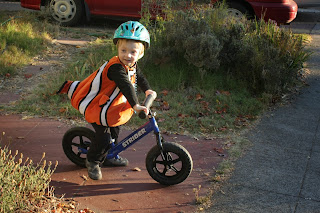