Well, with some support. Dylan's much happier sitting than laying down, since he can see his toys and the world around him more easily. Rolling over progress seems to have stalled.  He's mastered rolling from front-to-back, but doesn't seem to think that back-to-front is worth practicing any more. He did it once and ended up with his arms pinned underneath him, so he likely figures that back-to-front rolling is for chumps.
Posted by Lorien at 6:14 PM 1 comments

Dylan is five months old, and the pediatrician gave us the go ahead at his four month appointment to start him on solids whenever he's ready.  We were all excited and bought some local, organic avocados, apples and squash.  First we tried avocado: He was not terribly impressed. Then we tried apples, then squash.  He seemed to like the flavor of those foods better, and was willing to take a few spoonfuls, but then used his tongue to push most of it out. I know some apple and squash got into his tummy, since about an hour after eating he spat some up brown (for the apple) and orange (in the case of squash), on my crisp white shirt.  Motherhood is so glamorous.

On a side note, I know I shouldn't be feeding him this, and that it doesn't count as "solid" food, but I gave him a few small spoonfuls of my chicken soup the other day, and he ate it up. So between that, and his enthusiasm for licking and gumming my apple cores, he does seem to like the taste of food, but he's not developmentally ready yet for the physical process of eating solids. We'll give it a rest for a few more weeks and then try it again.

Oh, and there's no 5-month wellness appointment, so we don't have any 5 month stats.
Posted by Lorien at 11:49 PM 3 comments

We donated Dylan to science!

Actually we just loaned him.

Dylan took place in a study at UC Berkeley's Infant Cognition and Language Lab.  He sat in a high chair and was shown boxes of yellow and pink ping pong balls. The researcher took samples of balls out of the boxes.  Some samples were representative of the color distribution of balls in the box, and some were not.  The point of the study was to determine whether babies have a sense of probability.  They timed how long Dylan looked at each sample, since babies are known to look longer at unexpected things. 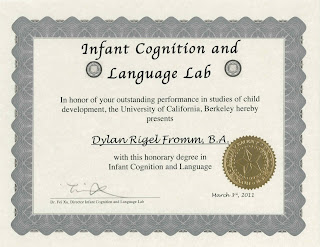